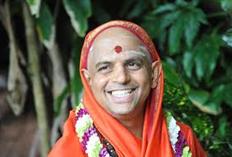 No one who knows Sri Jayendra Puri Swami could ever doubt that he would be a worthy successor to His Holiness Sri Tiruchi Mahaswamigal, who attained Mahasamadhi on January 14th, 2005.  Although Sri Jayendra Puri Swamiji was officially nominated as the successor to the Peetha at Sri Kailash Ashrama Mahasamsthana in Bangalore, India, on December 11, 2003, he has been incharge of the administration of both Sri Tiruchi Mahaswamigal’s ashram and its adjoining Sri Rajarajeshwari temple since 1993.

Sri Jayendra Puri Swami, who was born on 20th of October 1960, had a happy and fulfilling childhood and was a bright student at the top of the class.  Yet something was missing.  Swamiji had experienced a lot of success in life, but felt a strange hollowness.  Coming from a somewhat modern family, Swamiji’s first exposure to Hindu scriptures was when Swamiji was 27 years old.  What was amazing was that when Swamiji read these scriptures for the first time, it was like Swamiji knew them already.  They all seemed so very familiar.

It was then that Sri Jayendra Puri Swamiji felt inspired to make his way to Sri Kailash Ashrama Mahasamsthana to seek guidance on the divine path from His Holiness Sri Tiruchi Mahaswamigal.  The instant Swamiji met His Holiness Sri Tiruchi Mahaswamigal, Swamiji knew immediately that he had found his guru.  There was not even a trace of doubt in his mind.

Swamiji explained that his aim in life was to attain the Divine Mother in all her beauty and divinity.  Swamiji came to Sri Tiruchi Mahaswamigal in 1987.  As soon as he met him, he expressed his desire to take sannyas.  Swamiji was asked to wait.  A month later, he was sent to Haridwar to learn Sanskrit and the scriptures and to be of service to His Holiness Acharya Mahamandaleshwar Swami Prakashchand ji Maharaj there, who was old. Just before he left, he received the robes of brahmacharya.  He lived in Haridwar and North India for seven-and-a-half years.  Early in 1989, before the Allahabad Kumbhmela, he wrote to Mahaswamigal, again seeking initiation into sannyas.  Mahaswamigal finally gave him permission with instructions that the ceremony in Haridwar to be conducted with Sri Tiruchi Mahaswamigal as his Guru.

In Haridwar, Sri Jayendra Puri Swamiji kept to himself and performed his disciplines well.  On completing his duties and study, he returned to Sri Kailash Ashrama Mahasamsthana to serve the Goddess and his guru, His Holiness, Sri Sri Sri Tiruchi Mahaswamigal.

One of Sri Jayendra Puri Swamiji’s many special talents is his aptitude for learning languages.  He can speak all the South Indian dialects, as well as Hindi.  He is also fluent in German and Italian.  Seeing his flair for languages, Mahaswamigal arranged for a tutor to come here and teach him Italian in the ashram.

When His Holiness Sri Tiruchi Mahaswamigal was asked why he chose Sri Jayendra Puri Swami as his successor, he said that Sri Jayendra Puri Swami is well educated and sincere.  He has a thorough knowledge of the shastras and carries on the tradition of the ashram with complete devotion.  He is compassionate.  He has concern for the poor and works for the welfare of all.  He is calm and composed.  He understands our sampradaya (spiritual lineage).

After nominating Sri Jayendra Puri Swamiji as his successor, Sri Tiruchi Mahaswamigal called together all of the ashram and temple residents as well as a select group of distinguished devotees, to inform them of his decision.  At this time, he made it known that proper respects should be paid to his successor and that all appropriate protocols should be followed.  Everyone felt blessed to have witnessed their Guru’s ordination and blessing of his most worthy successor.

Swamiji’s one and sole aim is to revive the glorious heritage of the Bhartiya Sanskriti in its totality with due respect and regard for all other world cultures and present the goodness of all the cultures to the entire mankind in such a manner that everyone respects the other irrespective of geographic, ethnic, language or any other differences and ultimately reaches God in all glory.